"Did you see this amazing marketing campaign for ECM?" said no one ever. Which can only mean one thing: you can be the one to craft it.

When we think about great promotional examples, it's never about B2B campaigns. We think about ads for everyday products, even the ones so famous they actually don't need advertising (think Coca Cola and Pepsi). Now we think it's about time that the B2B business changes that.

There are already a few notable examples of companies embracing social media. Have you seen the exemplary Maersk campaign: you don't have to be interested in cargo ships or in world trade to become their Instagram follower. You just have to appreciate a pretty picture (more than 17.7k followers do). The same goes for General Electric and their 194k followers. However, the ECM business has done nothing. In a recent CMS Wire article, Joanna Madej wrote that the constraints in the B2B creative process are like in composing a haiku. When you’re allotted so few syllables, half of the poem’s impact comes from the careful process of selecting those particular words. Here are some ideas to help your creative ECM marketing juices flowing and create that haiku. 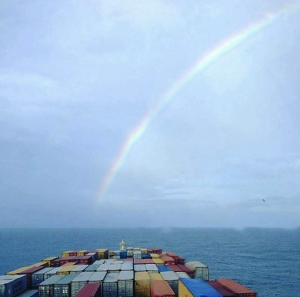 Ads in the business world are all about solutions. Solutions to problems. This doesn't leave a lot of room for the positive messaging, which is not problem-related. That is exactly why Xerox saw the opportunity to create the "Get Optimistic" campaign to connect with top accounts. The campaign was targeted toward decision-makers and it was all about "optimism is smart business". Xerox provided valuable insights into how similar organisations used optimism and confidence to improve their work. They did that in frequent but short emails that delivered powerful and positive messages. The longer content came in the form of printed and digital magazines. A microsite was created to serve as a content hub and repository. But Xerox didn't stop there. They traveled 10 U.S. cities with a services-based live event series, which gave customers and prospects the chance to hear customer stories and gain deeper understanding of the Xerox services. Specially created infographics added color to the magazine, the microsite and social media. The campaign generated over 1000 new sales appointments and more than $1B in pipeline revenue. Furthermore, it changed the perception of Xerox with its key prospects.

Remember to Have Fun

Yes, it is important to keep the content relevant. It is also important to have fun with it. When creating your next video or guide book, think about how to present it an a different way. Мaybe instead of writing a manual write a gamebook? Going through Document Management platforms often feels like playing a gamebook and constantly having to decide which door to open. Or create a guide about how to find your way through a maze or a huge castle?

Take for example SunGard who decided to target IT professionals by unleashing a zombie-themed campaign. Sungard provides IT operations support and serves to more than 70% of Fortune 100 companies. The concept of a zombie apocalypse neatly fit into SunGard’s key business of disaster recovery. Bonus points for timing the campaign with the release of a zombie movie. SunGard involved multiple marketing channels and used the hype around shows like "The Walking Dead" and movies like "World War Z." Furthermore, SunGard has a series of humorous instruction videos, which resulted in over 3,000 leads generated in 3 days. The email click and click to open rates were three times higher than the average. The whitepaper at the end of the video was had it's CTA clicked 87.4% more.

Yes, there is LinkedIn with its groups, but there is also too much noise. Think about all the times you wished there was a space like SpiceWorks where a lot of IT professionals are active and engaged. All the know-how and the help you need for you ECM needs. Or a site for someone else's ECM needs?

Perhaps something like American Express launched: a site that gives advice to small business owners "Open Forum." The site is frequently updating its content, including blog posts and videos. However, the one thing that makes the site special is the "Idea Hub" a forum that allows members to network and share ideas with each other and industry experts. It now has more than 18,000 members and attracts more than 1m unique visitors per month. Interestingly, social media is one of the most popular topics on the site. Open Forum is also supported through other social media channels like Tumblr, Twitter, LinkedIn, etc. Its Facebook page has almost 400,000 fans.

And don't forget your customers in other countries...

OpenText had the right idea when they launched a “Make a Statement” campaign to promote their StreamServe solution. The assets and advertising media were translated in to 6 languages. The result? Over $3 million in pipeline revenue to date.

Whatever you do, widen your focus, but do keep the content relevant to ECM. It might be the same old information, but if you find a new way to deliver it, people will engage. Make sure your efforts are backed up by social media. Include tips for productivity, document and record management, and office humor. Remember, you are not alone. Ask your audience what they need (Twitter worked out good for Groove and KISSMetrics). ECM doesn't have to be boring. After all, you aren't boring and neither is your audience.

You need some addition inspiration? Check out our personal experience with ECM marketing, awarded with OpenText Killer Content Award.

St. Valentine is approaching and everyone is either thinking of wine, roses and Swiss chocolates....

A B2B buyer persona is different to a B2C one. To set you on the right path here are a few...

Mobile B2B marketing is finally here. Location helps marketers to be relevant and helpful, instead...

It’s not only possible for a B2B ad campaign to go viral, but successful campaigns share...