How to Create a Great Value Proposition (Part 1)

I have written a beginner’s guide to creating a killer value proposition, explaining some of the basics of how to create a value proposition. Now, I’m going to go deeper. Our value proposition framework will show you how to define your audience and their needs, identify opportunities in your market, and then establish unique selling points.

This is part I: our advanced guide to creating a great brand value proposition.


How to take on Google

As far as highlighting the benefits of a clear and well-designed brand value proposition, let’s start with the giant of internet searches: Google.

Anyone with an internet connection knows Google, so taking them on as an upstart search engine seems like a losing proposition. However, Google does indeed have competitors including Microsoft’s Bing and a privacy-oriented young search engine called DuckDuckGo. DuckDuckGo advertises itself as a search engine for web users who are concerned about privacy and excessive corporate bias. The site claims that it does not track users, unlike Google, which tracks everything a user does in perpetuity. This offers prospective users the promise of privacy, as well as a wider variety of results, since past searches don’t influence the search algorithm results (as with Google).

If you land on DuckDuckGo.com, your search bar reads ‘Privacy—simplified’, which acts as the site’s motto and ethos. The landing page itself has a clear statement of the value proposition: ‘The search engine that doesn’t track you’. It has a pop-up box which enumerates 3 benefits that a privacy-minded user will want from their search engine.

It also has buttons enabling a user to evangelise on the search engine’s behalf, which is a nice touch despite it not being a part of their value proposition. There is also an element of the site’s form reflecting its content, the medium as the message. The site has a relatively clean design, unlike Google’s more ostentatious doodle. This reflects the ‘simplicity’ aspect of DuckDuckGo’s marketing, which refers back to their value proposition: offering the simple and private search engine.
In contrast, here is the landing page for Microsoft’s search engine, Bing. 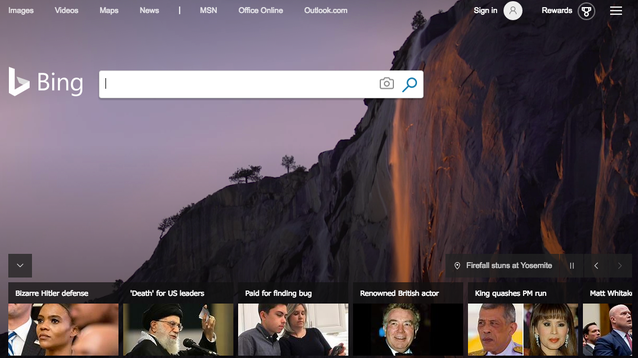 Bing’s landing page is much more Google-like, in that it has tabs above a search bar and a major image to draw the visitor’s eye. Bing’s major advantage is that it’s Microsoft’s search engine, so it’s bundled with Microsoft products. In order to incentivise the use of Bing over competitors like Google or Yahoo, the company offers Microsoft Rewards points for each Bing search, which can be redeemed for rewards and to enter sweepstakes. Microsoft advertises Bing through the ‘Bing it on’ challenge, and TV programs sponsored by Windows will feature characters telling each other to ‘Bing’ something, rather than ‘Google’ it.

Microsoft takes these measures because Bing’s value proposition is less apparent. One tech journalist covering these 3 search engines for Business Insider noted that ‘Bing has made a valiant effort to keep up, but it would need to innovate on search somehow—rather than merely copy Google's design choices—to be on top one day’. Whatever its benefits might be, Bing lacks the sort of great value proposition that sticks in the consumer’s mind. So despite the resources that Microsoft has invested in promoting Bing, it still lags far behind Google. According to numbers from late 2017, Bing accounts for about one quarter of searches in the UK, and only about 5 percent worldwide. Use is highest in the US, where it is around a third, with Google getting 80 percent of search queries or more worldwide.

DuckDuckGo’s numbers are harder to obtain, since they don’t track users. According to a 2012-13 survey conducted in the United States, only 5 percent of users had used DuckDuckGo. However, DuckDuckGo reported a spike in 2013 after news about internet surveillance, and they report that traffic increasing substantially since then. This is impressive for a search engine founded by one programmer a mere decade ago, and it’s a testament to the power of a great value proposition articulated clearly to the consumer.

In the past, I’ve broken down the elements of great value proposition design like this:
Let’s look at the example of DuckDuckGo through this lens:

A search engine offers online search results as its product. From the days of Netscape Navigator until today, they all offer this.

Once upon a time, Google became the internet’s all-conquering giant by triumphing over competitors like Yahoo and AskJeeves. The internet was a more chaotic place, so the value proposition that Google offered was returning the best search results by ranking them according to popularity. In essence, their algorithms crowdsourced authority by using popularity as the determining criterion.

The results spoke for themselves: Google’s capitalization is climbing towards one trillion dollars, and most search engines swiftly copy Google’s features as they’re implemented. This means there was a space for upstarts that differentiated themselves in some way.

Google’s growth and consolidation has been clear for a long time, and it’s also been clear to those paying attention that there was a drive for ever-greater data collection. In 2012, ‘Google announced today that it will begin tracking users universally across all its services—Gmail, Search, YouTube and more—and sharing data on user activity across all of them,’ according to one tech paper. ‘So much for the Google we signed up for’, wrote the author, who concluded that the move was a betrayal of Google’s ‘don’t be evil’ motto.

For various reasons—the growth of tech giants into monopolies, headlines about surveillance, etc.—there was an opening in the market related to the issue of privacy. Even if most users are ambivalent towards internet privacy, there is still a niche market for a service that promises a more unobtrusive and unbiased search experience.

Of course, not every company can sell a unique product. But the principles are the same, so I’ll delve into those more in part II.

You know you need to stand-out in the market, but how do you create a killer value proposition? The...

Is your business targeting multiple audiences? If yes, are you already using LinkedIn Showcase...

Google has begun penalizing sites that use “intrusive” ads (a.k.a. pop-ups) so how do you avoid...

In Part 2 of our advanced guide to creating a great brand value proposition, we show you how...